Cardi B says she wants to tell her side of the story as soon as her New York assault case is over.

Cardi B was charged with assault back in 2019 stemming from an alleged fight at a Queen’s strip club. According to reports, she allegedly ordered attacks on two bartenders, Jade, Tekashi 6ix9ine’s current girlfriend, and Baddie G. The attack was allegedly triggered following accusations that Jade was sleeping with Offset. Both bartenders claim they got injured during the brawl when Cardi B’s entourage threw bottles and chairs.

For this incident, Cardi B was indicted on 14 charges, which included two counts of assault. She later rejected a plea deal. Since this incident and the following court appearance and charges, many individuals have had a lot to say, especially those who do not support the rapper. On Wednesday, Cardi tweeted, ” I can’t wait till sh*t is over so I can tell my part of sh*t. Motherf****rs really ran with the I send Nikkas to touch b**ches sh*t for too long.”

One user responded to her tweet writing, “NAH FR BECAUSE THEY BEEN LYING ON YOUR NAME FOR SO LONG CLEAR IT BAE.” Cardi B quickly jumped on the opportunity to double down on her previous statement, directly retweeting the fan and adding, “Super clear it ….with Receipts and all!” 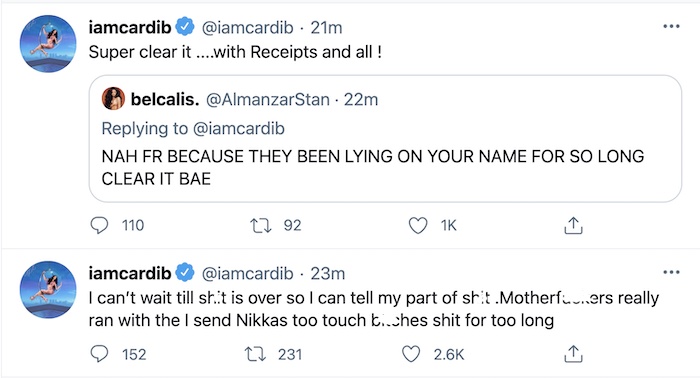 The Bronx rapper was, of course, referring to the narrative that many have voiced over the years that she allegedly sent men to assault the strippers in the club as she believes Offset was cheating with her.

Offset and Cardi B got married secretly back in 2017 and shared a daughter named Kulture together. They have had a rocky relationship with the “WAP” rapper, even filing for divorce last year. She later had the case dismissed “without prejudice.” They later rekindled their romance to the disbelief of fans. Cardi B notoriously then went on Instagram and told her fans she was “crazy” and admitted Offset was her “best friend.” Cardi also infamously released an album, Invasion Of Privacy, which detailed Offset’s infidelities and her own threats as a response.

We will watch to see how this plays out!