Chief Keef Shoot His Shots At Monica And She Responded

Chief Keef is shooting his shot at singer Monica, and it’s safe to say that she is enjoying the attention.

In a post made on his Twitter account last year, the rapper boldly divulged, “Monica quadruple bad,” referencing the “Angel of Mine” singer. For some reason, Monica didn’t see the tweet until Monday, April 26th, 2021, when her sons brought it to her attention. In a post on her Instagram stories, she shared Chief Keef’s tweet alongside the caption, “So I’m late & this tweet may not even be about me but my sons thought so & showed me today so that made it cool af @chieffkeefsosa.”

In response to Monica’s post, Chief Keef took to his Instagram story, confirming that he was indeed talking about her. He tagged the singer saying, “Nah that was about you!”

Monica reposted his IG status alongside a heart emoji. She later commented on a blog post saying, “Lmao. Nothing to see here, he was being kind! I’m his Auntie them age ? My kids thought it was cool tho!!!” 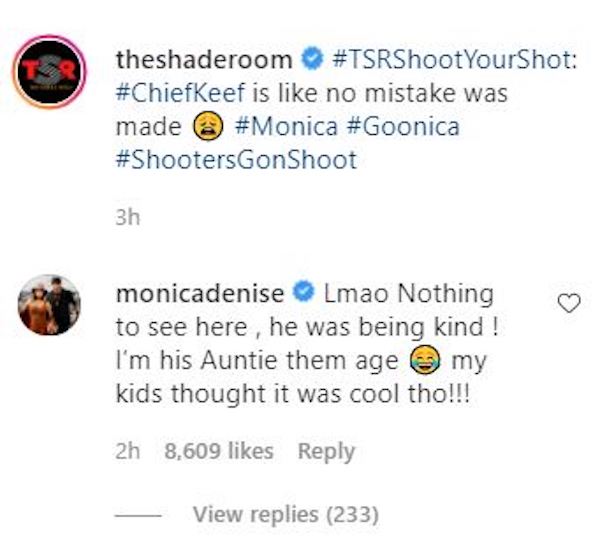 While Monica was clearly enjoying the attention, it’s obvious that she had no intention of seriously pursuing Keef’s attentions. Commenters on Instagram were definitely here for the banter between the two, though. One fan commented, “I know that’s right, Auntie Mon is forever a baddie.”

Monica is 40 years old and currently has three children. She was married to former professional basketball player Shannon Brown for ten years before the two called it quit in 2019. She was rumored to be dating NBA legend Allen Iverson following her split with Shannon.

Chief Keef, whose real name is Keith Farrelle Cozart, is just 25 years old. Earlier this year, he was the center of controversy after he was romantically linked to 16-year-old rapper Bhad Bhabie. The rapper was called out online by his child’s mother for reportedly standing up his child to hang out with the minor.

For now, it seems Keef can only dream about having the lovely Monica as his bae. Do you think they’d made a good couple?