Fans think Coi Leray gives them Dej Loaf vibes, but she’s not crediting the rapper for her sound.

The sound variations from artist to artist in hip-hop has always allowed the space for multiple sonically pleasing forms of the art to exist simultaneously. Though the genre has certainly evolved, the thing that stuck from the myriad of guests that the culture has had over the years is melody. So popular is the style of rapping today, the Academy added a category for ‘Melodic Rap Song’ to their roster. While many artists in hip-hop now consider themselves melodic rappers, there are still those whose unique sound is a stand out among the rest.

An early breakout act into this new wave was Dej Loaf, one of the first female rappers to dabble in the style. Her 2014 song “Try Me” opened the gate to a new sound that is still influencing hip-hop today. Fans believe that rapper Coi Leray seems to be borrowing Dej Loaf’s sound without credit, and both rappers chimed in on the growing speculation.

For days, Twitter has been buzzing with conversations comparing the two female artists’ music. One fan straight up said, “Coi Leray sounds like Dej Loaf.” When Leray caught wind of the discussion, she was first to set the record straight. “Coi Leray sounds like Coi Leray,” she noted on Twitter. The message prompted a reply from Dej Loaf, who wrote, “Well I sholl wish my folks stop hitting me about it [crying laughing emoji] pissing me and my homegirls off! Congrats tho Coi [balloon emoji].”

Interestingly enough, Dej Loaf may not be entirely convinced after all. The rapper cosigned a tweet that read, “We need to give Dej Loaf her flowers” and “Dej Loaf got a lot of kids if we being honest,” clearly indicating that she doesn’t disagree. Moreover, Dej Loaf wrote another message on Twitter that read: “Lil Copy Tail Selves.”

With the oversaturation of hip-hop artists in the music industry, there has to be room for similar sounds now and then, and the topic has certainly occasionally reared its controversial head. However, fans are fixated on Coi Leray, seemingly deriving her sound from Dej Loaf’s. 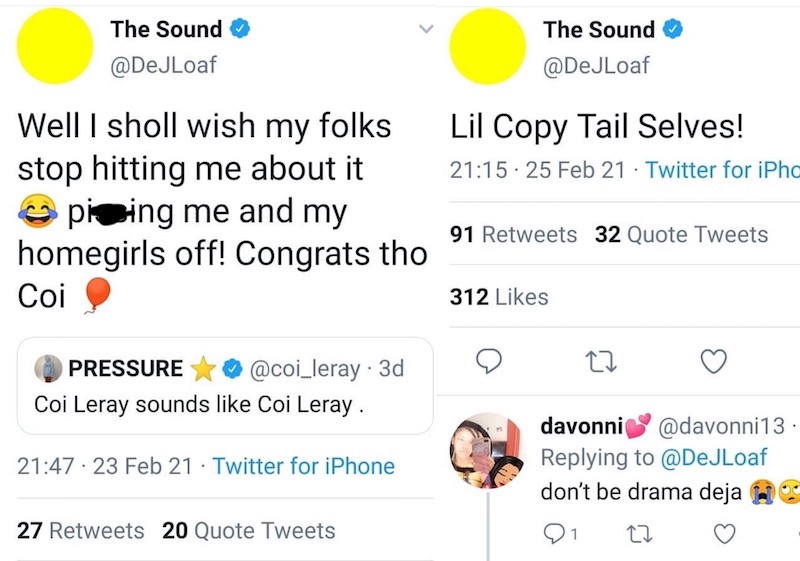 You be the judge by listening to a snippet from each of these artists. Do you agree that Leray is copying Dej’s sound?