Jada Kingdom reveals she’s battling bipolar depression as she pushed back at critics over her weight loss.

Jada Kingdom hit back at critics who have accused her of being on drugs. The criticism came after the “Best You Ever Had” singer posted several photos of her during a night out, looking slimmer than usual.

In a now-deleted Instagram post, the singer sent a harsh message to the naysayers. She wrote, “Note to hypocrites : F** YU! Guh look fi ah dog and s**k it hard. If losing all that weight means i’m sniffing coke then call me coke head Twinkle caz I LOVE IT HERE! neva been this happy. #2yearsoffighting I worked hard for this.”

The songstress continued, “living with bipolar depression opened my eyes to so much and i jus wanna say… F** yu! agen & agen, tf unu feel like #Cokeheadtwinkle.” 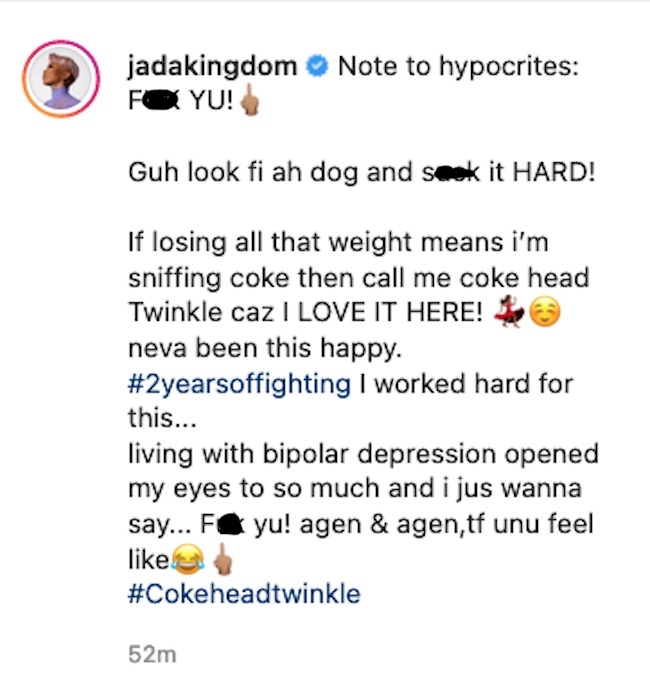 Still not satisfied with that post, Jada went on to address the issue further in her Instagram stories. In a series of videos, she vented, saying, “Hypocrites, hypocrites, get out of my DMs. Mi literally just see two female DM me basically saying don’t mind social media, and don’t follow what people ah say.. And dem two same page deh mi literally screenshot over another page ah done mi bout how yeah mon she deh pon coke fi true.. Look how she slim down and s**k out like bag juice.”

She expressed, “Mi no want nuh hypocrites as friends, family or fans, jus move from round mi..Come outta mi DM.”

Not quite done, Jada further ranted, “Mi use to hear seh mi have elephantiasis, how mi look like Humpty Dumpty, mi look like Rolly Polly, mi look like Barney…the amount a tings mi use to hear, and a never lie, so weh mi duh, mi work pon it because mi never comfortable with myself neither.”

Despite the negative criticisms, not everyone has been critical of the singer’s new body. Fans on Twitter have been showing her love with several reposting her latest images.

This is not the first time that Jada has addressed critics about her weight. In September last year the singer who at one point weighed 224 pounds wrote, “Yes, mi born big, mi born big, a wah? Yes mi was 17, mi born humungous, live with it!” This was after social media users commented on a video of her in a store, calling her out for being overweight.

Jada Kingdom is opening up about her struggles with bipolar depression and has been very opened to her fans about her struggles with weight, being sexually abused at a young age, and other hardships she faced growing up in Jamaica. Dancehall veteran Spice, took the time to show Jada love and support, commenting under her various posts and her subsequent clap-back to the critics. Spice herself has experience of this type of criticism from trolls online. She has faced a lot of negative comments for her weight and skin color over the years and has always been very vocal about it.

While Jada Kingdom is no stranger to hate mail on social media, it’s certainly a positive to see her facing it head on and getting the support not just from her fans, but also from her peers in the industry like Spice.