Kodak Black says recent controversies surrounding his sexual assault case is to be blamed for his album delay.

The Pompano Beach rapper has announced that he is delaying the release of his forthcoming album due to the current controversies surrounding him. In a video posted on social media, the rapper said he was advised by his team to delay the release of the much-anticipated project, which would be his first since being released via a Donald Trump pardon.

“I wanted to give y’all an album but these platforms say it’s too much talk about this bulls**t and we should kinda wait, so can y’all please shut up,” Kodak tweeted. 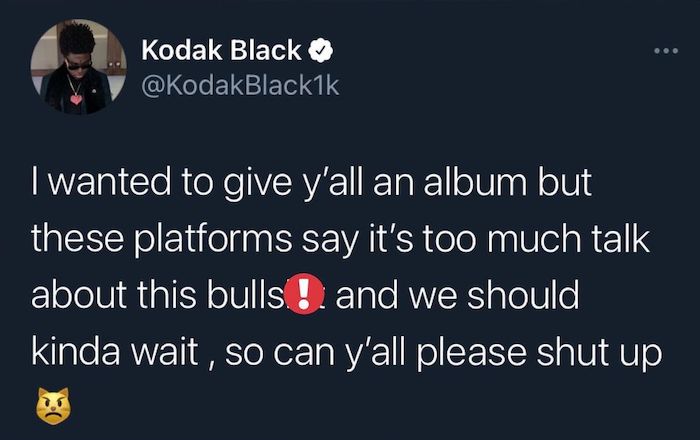 On Wednesday, April 28, Kodak Black pleaded guilty to charges of assault and battery, rising from an incident in 2016 involving a high school student in Florence County, South Carolina. Prosecutors say Kodak pushed the girl into a wall and onto a bed before assaulting her in a hotel room.

Kodak Black had previously denied the allegations, but in court on Wednesday, he explained that he was trying to have a “romantic encounter” with the alleged victim. It is alleged that his attempts were not welcomed, and the student revealed that Kodak then bit her. The rapper agreed the claims were true.

He told the court, “I apologise. I’m hopeful we can all moved forward. I wish her the best in her life.”

The 23-year-old rapper, whose real name is Bill Kapri, received 18-months probation and a 10 year suspended prison sentence. He also agreed to attend counseling as a part of the negotiated plea. In addition, the court ordered that Kodak cannot drink alcohol, use drugs, or possess guns under the terms of his probation.

The rapper has had his fair share of run-ins with the law. He was previously sentenced to 46 months in prison over weapons charges before Trump pardoned him on his last day in office. Despite his troubles, the rapper has always come through with music for his fans. In 2018, he had a number one album in the U.S. Fans who were looking forward to the album are still appealing to him to release the project amid the controversy, or as they see it, the publicity.