Kodak Black was only recently released from prison, but the Florida rapper has been busy making everyone aware of his continued presence in the rap game while also participating in some minor beef. One such dispute occurred between Black and Memphis artist Pooh Shiesty after the two seemed to disagree about who started the money-spreading trend on Instagram.

Despite recently naming Kodak Black as one of his biggest influencers, Pooh Shiesty called out the Florida rapper for laying claim to the cash flaunting fad, saying that he had been spread his cash for years. Pooh took to social media to comment on the claim, saying that Kodak had officially lost his respect.

Despite the disagreement that some would rank high on the petty scale, the two rappers seem to have squashed their short-lived beef. Kodak was the first to attempt to deescalate the conversation online, brushing off the argument by writing, “Before y’all think a n***a being petty, I don’t give a f*ck about none of this sh*t, man.”

However, on Monday, Shiesty posted a picture of himself in a convenience store on Instagram while holding a fat stack of cash and captioned the post, “Anybody That Got Smoke With Me Got Shot At Or They Tried To Fix It”.

The comment raised eyebrows among his followers, considering the recent shooting involving Kodak Black and his security team. Some social media users thought Pooh might have been hinting at his own involvement, but that assumption was quickly cleared up in the comment section. 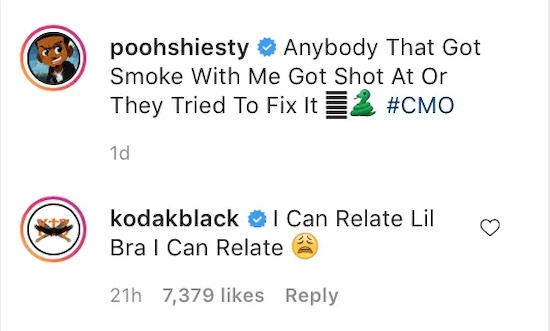 “I Can Relate Lil Bra I Can Relate,” Kodak Black replied to the post. While the reply seemed to be sincere, some followers wondered if Kodak was trolling Pooh. When one of Pooh Shiesty’s fans asked if this was the case in the comment section, the Shiesty Season rapper replied, “No that’s bro.” It looks like both parties are attempting to keep the peace in the situation this time around.