Today is new music Friday, and fans are anxiously awaiting the release of tracks from some of their favorite artists. This Friday might just be a lot bigger than previous ones in terms of the list of heavyweights set to burn up the airwaves. We have Drake and Tory Lanez dropping albums, and we also will be receiving music from Tyler the Creator and Lil Baby. Typically, the critics of music are the fans themselves, but today there was a twist when Kodak Black shared his displeasure about his new track titled “Thugged Out” with YNW Melly.

Word of their collab has been hitting the grapevine for some time now, but sadly fans hadn’t gotten their desires satiated due to both rappers dealing with a slew of legal dilemmas. YNW Melly is currently in custody at Broward County Jail in Florida, awaiting his double-murder trial. He was arrested and charged with two counts of first-degree murder. According to police reports, he and another rapper, YNW Bortlen, killed two of their friends then staged the crime scene to look like a drive-by shooting. Back in April 2020, the 21-year-old rapper was denied release from prison after he contracted Covid-19.

Kodak Black, on the other hand, had a little bit of luck. His sentence has been commuted, and he was released from jail recently following a pardon by former President Donald Trump. Miraculously it seems the pair have found some way to make the magic happen, and their new track was released today, much to the displeasure of Kodak, who noted that the mixing of the track was of poor quality. 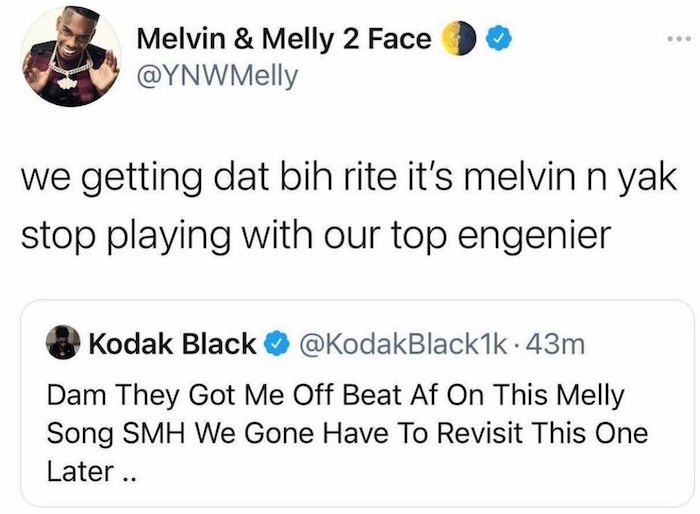 In a now-deleted tweet, he expressed, “Dam They Got Me Off Beat Af On This Melly Song SMH We Gone Have To Revisit This One Later.”

One fan seemed unphased by the matter at hand and instead directed his focus to Melly responding while in prison. “He got a phone in prison? I’m telling,” he exclaimed.

Check out their new track, “Thugged Out”.