Minister Marion Hall, formerly Lady Saw, says social media critics are to be blamed for her not wanting to share more photos.

The former Queen of Dancehall, who is now a minister, has once again sparked controversy about how a Christian should be adorned, following a now-deleted post on social media. The former “Queen of the Dancehall” posted a picture of herself on Instagram on Monday, April 4, clad in a white mini dress showing some serious cleavage. She paired her outfit with a plaid jacket, a white handbag, and heels creating a look that shocked many.

In the caption, she wrote, “I wanted to post my pictures from Saturday when I went out to eat by the beach, However, I held back because I know some of you will judge me over my outfit. Don’t even start!!!”

The picture has since been circulating on social media, with critics showing their distaste in the Minister’s outfit, while others expressed that it’s not their place to judge. 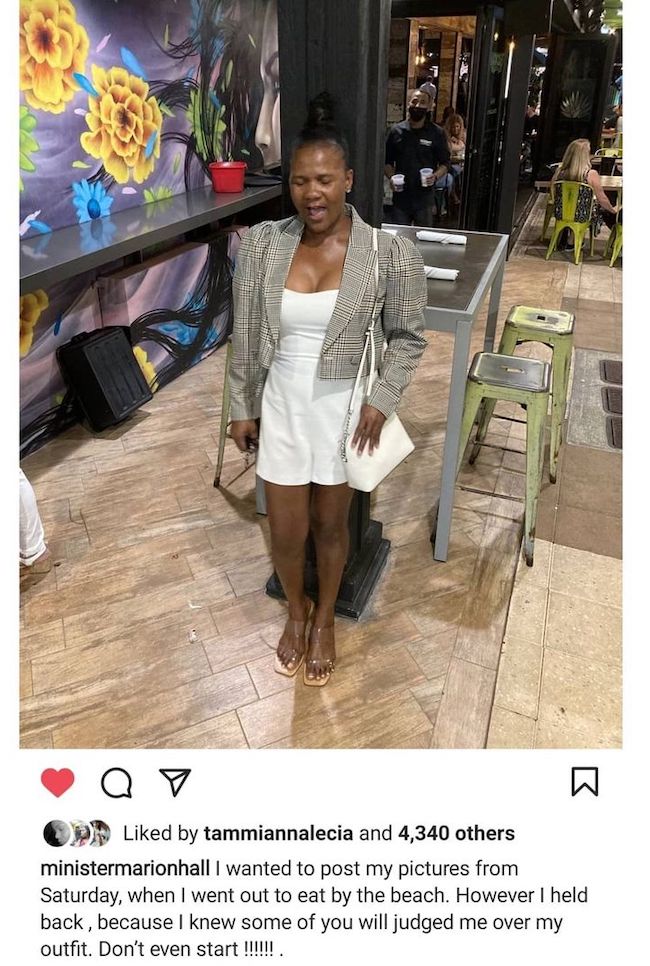 Some social media users speculated that the photo was reminiscent of her days as Dancehall veteran ‘Lady Saw,’ while others just found the photo “too sexy” for a minister.

Beneath Hall’s original post, fans and followers showed nothing less than love and appreciation, but perhaps the attention that the post had garnered led her to delete it some hours later.

This is not the first time that the Minister has come under public scrutiny for her attire, and perhaps, it was these same critics she was warning, “don’t even start!”

In early February, the gospel deejay had to clap back at critics who condemned her for wearing a low-cut blouse. The Minister, who was in Miami on a lunch date with her friends, captioned that post, ‘Public service announcement for the holier-than-thou fashion police, Minister Marion Hall is a sexy Christian.”

Hall later posted a video on social media addressing the trolls who questioned her faith, saying, “God cares for what is behind the heart…not my boobs. If that’s all you see I guess they look good right? I’m still a Christian. I’m still Marion, not Lady Saw.… I’m so blessed and I love my body… I’m a sexy Christian.”

However, amid the recent criticisms, Hall says she will be holding back on what she shares on social media. What do you think of her latest photo?