NBA Youngboy has responded to Wendy Williams after the messy host in March took jabs at his stage name “NBA Never Broke Again” while discussing his latest federal charges and ridiculing him for being the father of seven children at 21 years old.

The young rapper’s controversial lifestyle and recent legal problems are the type of content that show hosts like Wendy Williams need for shock value, so it is barely any surprise that she picked him up on her radar as she dished on his life and even commented on his unfolding legal troubles. Wendy irked Gaulden’s mother when she said he had to go to jail for “lowering property value,” based on facts of one of his ongoing cases.

On her show, Wendy Williams said, “he’s got to go to jail. How do you do a hot pursuit. There are innocent people out here. You could have hurt innocent people in your hot pursuit and running through people’s backyards. Nobody wants that. Bringing down the property value.”

Wendy even went further as she brought up his fatherhood of seven kids into perspective while also dragged Floyd Mayweather and Yaya Mayweather, mother of NBA Youngboy‘s youngest child, into the mix.

“And how is it that you do what you do with seven kids and only 21-years-old. And I wonder what Yaya Mayweather’s father Floyd [Mayweather] is saying about this.”

Wendy also shared an Instagram story from Yaya where she says, “my day is completely ruined,” while her audience guffawed at the message as Wendy goes on to advise Floyd that NBA Youngboy going to jail will be good for Yaya.

The rapper, whose real name is Kentrell Gaulden, though responded to Wendy in a very calm tone as he told her to count her blessings while asking that he be allowed to handle his problems in peace.

“I can leave my kids millions of dollars to divide but can’t give them the time they truly deserve,” he wrote in the post shared on social media. “Nobody understand me they never did sh*t sometimes I don’t understand myself but that’s fine because I’m okay I ain’t looking for you to feel sorry I just ask for one thing- For you to let me suffer in peace tell MS. WENDY WILLIAM I say she got a good soul and she’s a beautiful women [sic] I can see that threw all the bad comments thrown at her tell her count her blessings (STAY IN GOOD SPIRIT) Sincerely Kentrell.” 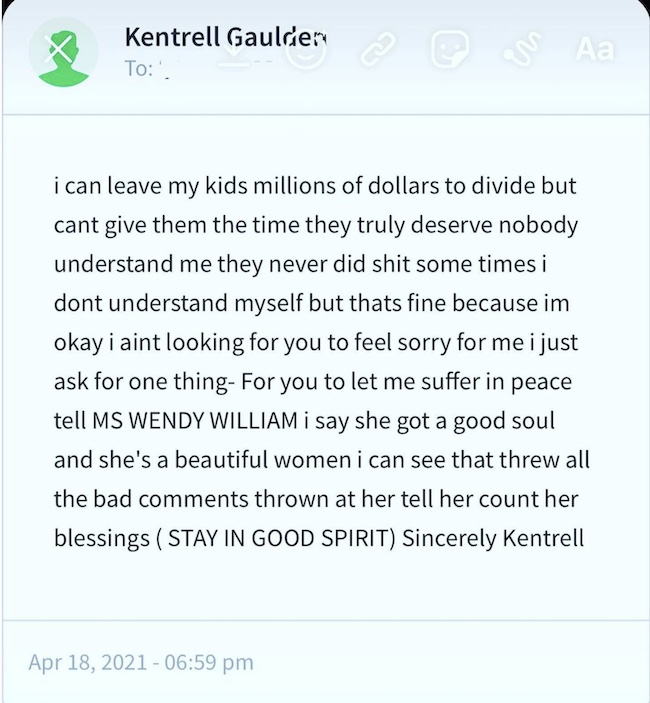 The 21-year old rapper’s message is apparently sent from jail after being arrested on a federal warrant for being in possession of illegal guns in 2020. The charges laid by authorities saw the rapper in an unwise and desperate move to evade authorities as he fled from police this week during a high-speed chase.

Wendy felt that Gaulden escaping in people’s yards would bring down the property value, which made his mother angry. Gaulden’s mother, on the other hand, took the time to drag Wendy while also addressing her to leave her son alone. The rapper has had a successful career in music, but that has been overshadowed by his arrests and the fact that he has a large number of children at such a young age.

Gaulden has seven children, six of which are biologically is and a seventh that he has acknowledged paternity of who isn’t biologically related to him. He is also going to become the father of eight children soon as his girlfriend Jazlyn Mychelle is expecting her first child with the rapper.