Nicki Minaj says she was only joking when she commented about not being invited to Lil Wayne’s birthday bash.

The Trinidad-born rapper has made it clear time and time again that her focus is no longer on partying but on her new family, especially her son. The issue came up again after Nicki Minaj joked about not being invited to Lil Wayne’s 39th birthday celebrations last Monday, September 27.

Wayne, known for his lavish parties, hosted several members of his Young Money family, including the rapper with the golden touch these days, Drake. The label president Mack Maine was also there, but many eagle-eyed fans noticed that Nicki was absent. Of course, she is highly regarded as one of the leading influences that helped put Young Money on the international map.

Following the star-studded event, Mack Maine posted an Instagram photo of the crew who attended the party. Nicki jumped in the comments and playfully responded, “I had so much fun.” Maine quickly responded, “@nickiminaj Lawwwdddd don’t do it like that Nicketo! This sh*t was so last minute. We could run it back deaux. It wasn’t complete without you.”

Drake even paid homage to Lil Wayne during the celebration. “I still, to this day, get nervous speaking about this man because, at the end of the day, as much of a brother and a mentor as he is to me, he’s still my idol. And still somebody who just puts me in a place where, when I start thinking about him, I start thinking about my family,” he said.

While Nicki Minaj didn’t specify, it seems some blogs thought that she was offended at being left out of the party and created some buzz around that. Nicki chose to clarify that she was only kidding around.

“Can’t even joke nomo chile,” she posted on her Instagram Story. She added, “These blogs so thirsty to post smthn for y’all to hate under. The obsession is a diff kinda real. We weren’t even in the same state. Just a lil jokey joke between me & my boo Mack.”

She ended by saying, “Have a blessed day y’all. I sure will. That’s why ya’ll pressed. #HappyPapaBearDay.”

It seems she just wanted to clear the air because her real focus is on her son’s first birthday today, September 30, 2020. She’s once again had to make it clear that “Papa Bear” is her only priority right now.

Perhaps the next party will even be bigger with Nicki Minaj included. 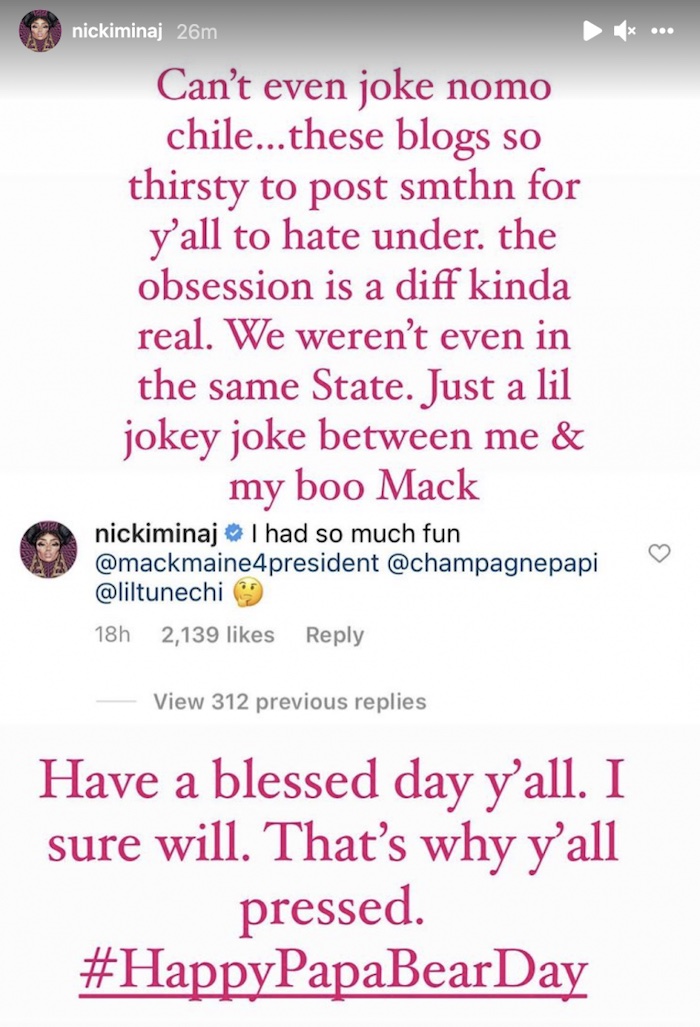