Rihanna isn’t hear for fans demanding she release a new album in 2021.

Rihanna doesn’t have the time or patience to deal with fans hounding her about when her next album will drop. She’s made it clear once again that she’ll drop a new album only when she feels it’s ready and she’s comfortable with the material on it. It seems she really has no time to deal with the issue in 2021 as she responded to a question from a fan about the same topic.

Under the photo that she posted on her Instagram to ring in the new year, which she captioned “new year’s resolution: apply the pressure.” Her stylist Jahleel Weaver commented, “Speaking of pressure, it’s the album for me.” Rihanna bluntly replied “ph**k you.” Several fans then took the chance under that post to beg for her next album.

She also responded to a next fan who asked questions along the same line saying, “This comment is so 2019, grow up.” 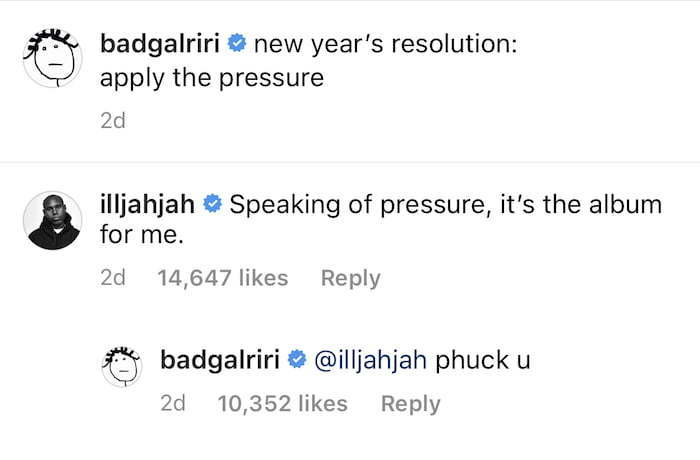 In March 2019, she told Vogue that she was “very aggressively working on music,” but that album R9 has never been given an official release date. Pharrell, who is also working on the project, revealed some details last year while he was being interviewed by Allure. He at least indicated that the album was worth the wait. He said, “Rih is in a different place right now. Like, wow. She’s from a different world. I’m willing to bet, because Venus is gaseous, that if they had a telescope that could zoom through all that shit, you’d see Rih laying there naked.”

Another glimpse at what is expected came last September after singer-songwriter Skylar Grey shared new music that she had been working on, which included a song with Diplo and RiRi that had some reggae elements. “I was working with Diplo on a song for Rihanna. Wrote this with a guy named Hymn. This was when Rihanna was supposedly doing some kind of reggae album. I don’t know if she’s still making a reggae album or what, but this is a song we did for it. I don’t have the whole song, I’m just going to play you a piece of it, and it probably won’t sound great because it’s an iPhone recording of the speakers,” she said.

In another interview, this time with Entertainment Tonight, Rihanna said, “I am always working on music and when I am ready to put it out in the way that I feel fit, it’s gonna come out. And you’re not going to be disappointed when it happens. It’s going to be worth it.” Rihanna’s Navy has been hoping for a new album since 2016 after she dropped ANTI.