Snoop Dogg clapped back at Eminem following his Shady45 interview.

The new year is off and running, but some battles from the last year are spilling over. It seems the beef between two veterans, Snoop Dogg and Eminem, is continuing to escalate. This was made apparent after an Eminem fan page posed a question asking if Snoop was being disrespectful when he said he didn’t consider Eminem in his top 10 rappers of all-time. A little while after the post went up, Snoop shared his views about the “Zeus” diss from Eminem’s Music To Be Murdered By: Side B album.

Snoop Dogg said, “Pray I don’t answer that soft ass S#$t.” He added some laughing emojis to drive home his feeling on the matter. Snoop was referring to Eminem’s verse “As far as squashing beef I’m used to people knocking me/But just not in my camp/And diplomatic as I’m tryin’ to be/Last thing I need is Snoop doggin’ me/Man, Dogg, you was like a damn god to me/Meh, not really (haha)/I had dog backwards.” 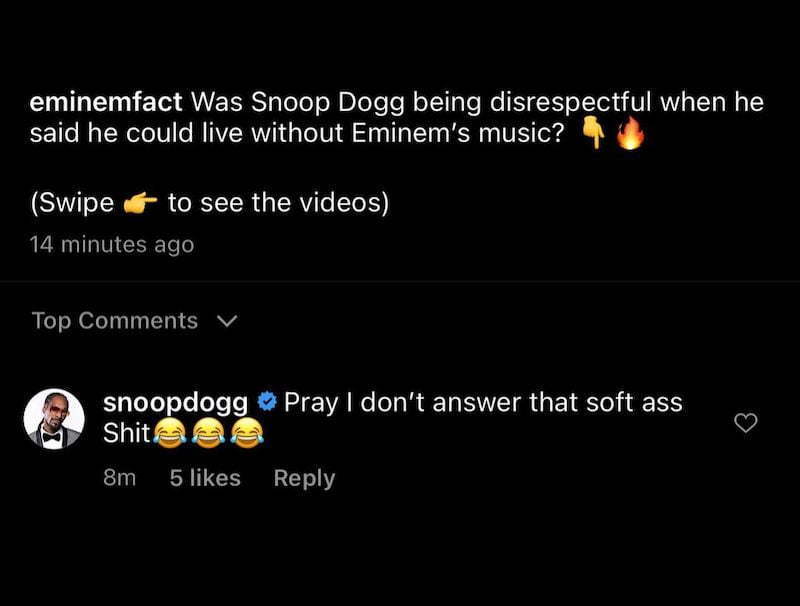 The whole disagreement between the two started back in July 2020, when Snoop Dogg was being interviewed on The Breakfast Club. He shared his views about the Detriot rapper and the fact that he simply doesn’t consider him top 10 material. “[Dr. Dre] has probably put Eminem in the position to where he could be one of the top 10 rappers ever. I don’t think so, but the game feels like he’s top 10 lyricists and all that that comes with it. But, that’s just because he’s with Dr. Dre and Dr. Dre helped him find the best Eminem that he could find.”

At the time, the comments did not stir any controversy between them, but Eminem recently shared that he had a problem with the comments while speaking on his Shade45 show last Thursday, December 31. That’s why he dropped the verse for Snoop Dogg.

“Everything he said, by the way, was fine, up to a point,” Eminem said. “Him saying I’m not in his top 10 because there are some rappers in the ’90s I can’t f$%k with…A: Him saying Dre made the best version of me, absolutely, why would I have a problem with that? Would I be here without Dre? F$#k no, I wouldn’t. The rappers he mentioned from the ‘90s—KRS One, Big Daddy Kane, [Kool] G Rap—I’ve never said I could f%$k with them. I never said that.”

Em added that what he really had a problem with was the tone that Snoop Dogg used, “I think it was more about the tone he was using that caught me off-guard ’cause I’m like, where is this coming from? I just saw you, what the f#$k? It threw me for a loop,” he said.

He continued on to say that it was the last statement made by Snoop that he felt disrespected by. “Again, I probably could’ve gotten past the whole tone and everything, but it was the last statement where he said, ‘Far as music I can live without, I can live without that s$it.’ Now you’re being disrespectful. It just caught me off-guard. I wasn’t ready for that,” he said.