Tekashi 6ix9ine and NBA YoungBoy are the top two most streamed rappers on YouTube in 2020.

It’s been a wild year for Tekashi 6ix9ine. He was released from prison earlier this year after COVID-19 fears in April. He challenged professional boxer Gervonta Davis at a strip club and is facing accusations for not maintaining one of his children. Not to mention he’s had beef with veteran rapper Eminem. In short, he’s no stranger to controversy or headlines. It seems he will at least get to close off the year on a positive note after it was revealed that he is the most viewed rapper on YouTube in 2020.

That was probably largely helped by his record-breaking “GOOBA,” which he released in May, a month after his release. According to Chart Data, the video got the biggest 24-hour debut for a hip-hop video ever in YouTube history. It was streamed at least 43 million times on the first day. The previous record was held by his now rival Eminem for the Machine Gun Kelly diss song, “Killshot” in 2018. That had 38.1 million views in its first 24 hours. Tekashi’s “GOOBA” has reached over 650 million views at the moment on YouTube.

He came in at number 21 on the overall list of most viewed songs this year with about 2.3 billion views. Placing number 22 on the list, and second, among the rappers, was YoungBoy Never Broke Again with close to 2.2 billion views. His older tracks keep bringing in the views for him. “Untouchable,” released in 2017, has about 212 million views, and “Valuable Pain,” released in 2018, has about 172 million. His early work this year also has received a good number of views. His song “Lil Top” has about 99 million views, and “Bad Bad” has about 90 million.

Rounding up the top three rappers was Eminem, who had about two billion views and landed at number 27 on the list. Even though released ten years ago, one of his most popular songs on YouTube remains “Love the Way you Lie” with Rihanna, which has reached over two billion views. His track with Juice WRLD this year called “Godzilla” has about 294 million views.

Take a look at the most viewed artists on YouTube for 2020. 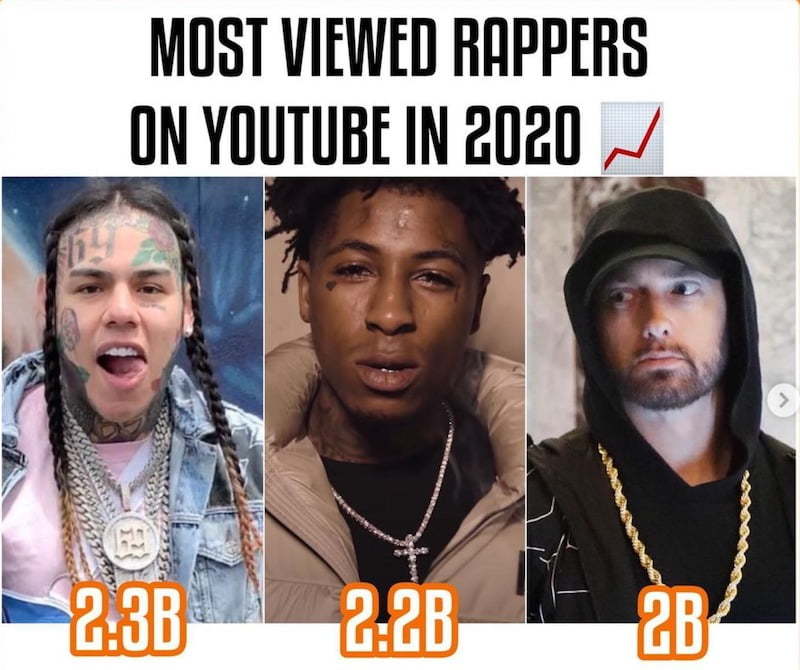