Vybz Kartel Calls Entertainers “Among the least educated In Society”

The dancehall deejay has been named as one of the entertainers that the government was considering to use to help change vax hesitancy attitude after his attorney-at-law Isat Buchanan said Vybz Kartel was willing to take the vax.

According to his lawyer, Vybz Kartel has received one shot of the AstraZeneca and is among a small fraction of prisoners who were willing to get the jab.

While the suggestion to use Kartel to reach the masses with the message to get vaccinated has been received well by the government, Kartel is speaking for the first time as he bashes other entertainers who are sharing misleading information.

In a story shared on his official Instagram account, the “Fever” artist noted that many uneducated artists are giving medical advice to their followers.

Vybz Kartel advised his fans to only involve him when it comes to music, but they should otherwise seek out information for themselves, not just rely on what some entertainers are telling them.

“So do YOUR OWN RESEARCH AND DECIDE FOR YOURSELF [WHAT’S] BEST FOR YOU…come to me when you wanna ‘whine your waist’ and ‘bruk out’ in a Party! That’s where I’M THE EXPERT,” Kartel said. 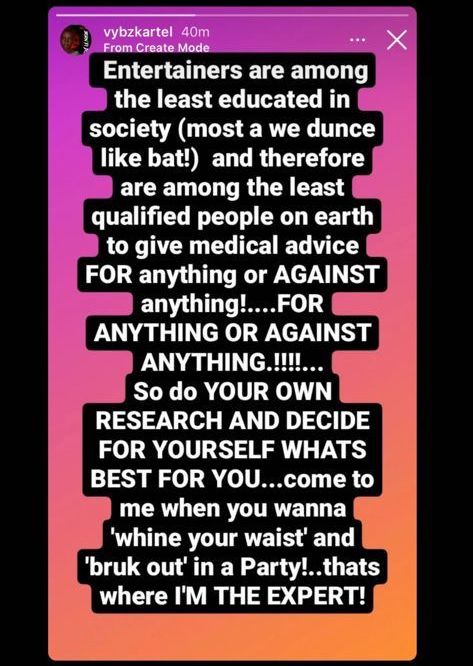 Many of Vybz Kartel’s fans online interpreted his latest public statement as a subliminal jab at none other than Buju Banton. Banton has been posting information online that the virus is fake and that the vaccine is a ploy by governments to suppress people.

Among his many posts on Instagram are those which state that the virus was created by the United States government, including the many variants. Lately, he has been posting erroneous information that claims that the U.S has patents for many of the viruses the world has experienced in the last few decades, including Hiv/AIDS, Swine Flu, Zika virus, among others.

On Tuesday, Buju Banton posted a list of the so-called patents with the basic caption “FAKE.”

However, he was quickly checked by many of his own followers who pointed out that the patents aren’t for the virus itself but for treatments, including vaccines being developed, and the reason governments apply for patents is to ensure that private pharmaceutical companies do not get it otherwise the costs for treatment will be too much to afford.

However, the artist still had a large number of people showing their support and thanking him for standing up to the government.

Meanwhile, among those who co-signed Vybz Kartel’s message was Skatta Burrell, executive producer for Downsound Records who was an anti-vaxxer himself until he became sick with the virus and said he went home to recover rather than going to the hospital because if he was going to die, he wanted to be at home with his family.

Burrell has since been encouraging people to take the virus seriously and protect themselves.

Music Producer Dale Virgo who has produced music for the likes of Rihanna, Drake, Chronixx, and others, also shared his approval for Kartel’s message with him, posting several clapping emojis in the comments section.