Yungeen Ace Details His Encounter With 6ix9ine At His Show

Yungeen Ace is continuing to deny that he had a run-in backstage with fellow rapper Tekashi 6ix9ine during the rapper’s concert.

In and Instagram live stream with DJ Akademiks, 6ix9ine claimed that Florida rapper Yungeen Ace was backstage his show in Miami last week. 6ix9ine also claimed that the rapper, who he’s had beef with, walked right by him and did not step to him.

The beef between the two first started when Yungeen Ace called out Tekashi 6ix9ine for snitching and said he didn’t respect him. Ace did make a point, however, that he would work with 6ix9ine if given the opportunity as it was just business. Needless to say, the comment didn’t sit well with Tekashi, who was recently released from prison after serving a reduced sentence in exchange for his testimony which implicated several members of his former gang.

Speaking in the interview with DJ Akademiks, Tekashi said, “F*ck all that. Yungeen Ace was at my show yesterday. F*ck all of the things that we talking about. Street rappers were at my show yesterday. If they want the static, I was there. He was at the show. He was backstage, he seen me, everything.”

The “Who I Smoke” rapper responded to Tekashi on his Instagram story, sharing the post with 6ix9ine’s claim and writing, “Mann dis ni**a so cap bra [laughing emoji]..wdf.”

Yungeen Ace’s denial story was sadly short-lived, as DJ Akademiks, who the rapper has also had beef with, later dug up a photo that showed the rapper was indeed at the Trillerfest event where Tekashi performed.

Yungeen Ace later explained the encounter in a live stream, saying he did see Tekashi, but the encounter did not quite happen how 6ix9ine said it did.

In the video, Ace said, “that ni**a was scared as f**k man.. then the nigga said he ain’t know me but he seen me in there. These ni**as trippin. This ni**a was in a car. This ni**a rolled past only time I seen this guy.”

Ace went on to say that Tekashi was masked up, with his chains tucked, and he was basically hiding in his car.

Fans have since been calling out Ace, stating that he’s a straight-up liar. One user commented, “Thought he wasn’t there?” while another added, “You said you never seen him.”

On the other hand, one Tekashi 6ix9ine supporter declared, “THEY ALL TALK HOT ON THE INTERNET BUT CAN’T EVEN TOUCH HIM IN REAL LIFE.” 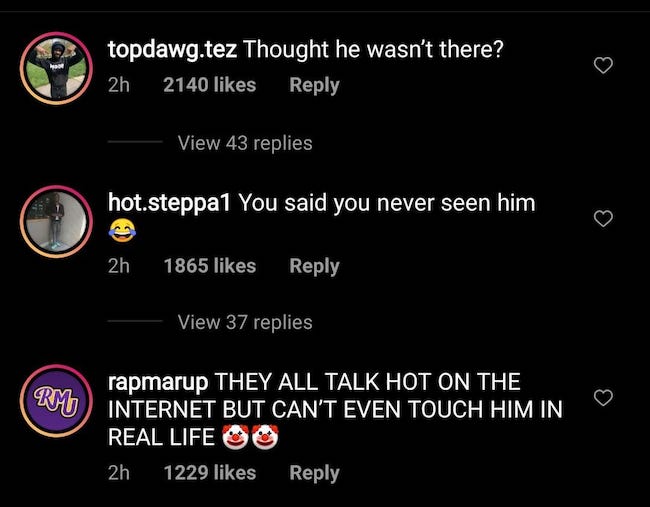 Fans are now anxiously awaiting 69’s response to the ‘he said, he said’ saga.